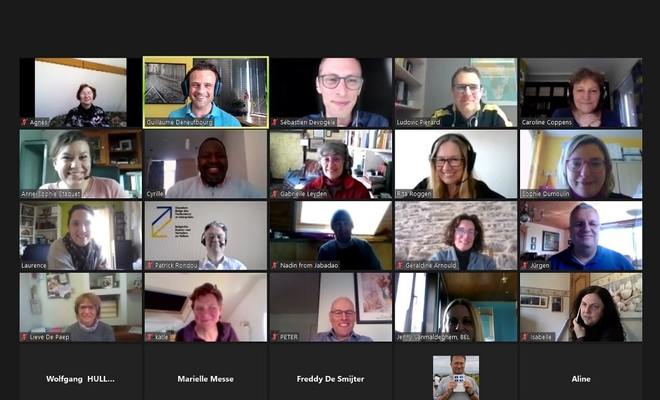 The CBTI, a renewal within continuity

The health situation having left no other option, the General Meeting of the Belgian Chamber of Translators and Interpreters (CBTI) was held this Saturday, March 20, 2021, by means of video-conferencing.

In his opening address, the President made a point of warmly thanking all the members for their support and their involvement at various levels. He in particular dwelled on the departure of two of the CBTI’s eminent figures, Agnès Feltkamp and Doris Grollmann, who are leaving the Board after several decades of loyal and distinguished service. A minute’s silence was then observed to respect the memory of Jean-Bernard Quicheron, the CBTI’s Honorary President, who passed away recently.

After two consecutive terms as the President, Guillaume Deneufbourg did not wish to stand as a candidate for the position again. Two members had put themselves forward to succeed him: Sébastien Devogele and Cyrille Ndjitat Tatchou. Five other candidates were moreover contenders to be elected to the Board of Directors.

After the meeting’s agenda had been approved, several new members – as is the custom – were given the opportunity to introduce themselves.

The annual report was then addressed and followed by a question-and-answer session. Everyone was able to note that this 2020 year, however unusual it had been, had nevertheless given rise to several fine achievements, especially in terms of defending conference interpreters, severely affected by the Coronavirus crisis, and the establishment of the Sectoral Commission for sworn translators and interpreters.

Following these presentations, Sébastien Devogele was elected. Aged 36, this conference interpreter from Courtrai will thus preside over the future of the CBTI for the next two years. Congratulations to him!

He will be supported by a team of 7 administrators: Isabelle Collard, Guillaume Deneufbourg, Max De Brouwer, Laurence Nys, Patrick Rondou, Cyrille Ndjitat Tatchou and Jenny Vanmaldeghem, for whom it will be the very first term. We all wish them every success in continuing along the pathway set out by the Board of Directors in recent years.

The following points on the agenda were also approved without discussion: maintaining the annual subscription fee at 200 Euros for full members, the appointment of three auditors and three members of the Disciplinary Committee.

This type of gathering forming the ideal opportunity for the administrators to listen to their base, several subjects were raised at the end of meeting, including the establishment of a new website, enhanced communication of the opinions formulated by our legal advisor, Karine Roobrouck, and the creation of a Sectoral Commission for literature translators which could in particular look into the question of copyright.

Despite the circumstances, the meeting ended on a festive note and those members who wished to do so were able to share a drink together, through the medium of video. As can be seen from the photo, the atmosphere was upbeat, even if everyone shared the wish to meet in person once again as quickly as possible.